Oh that we may preach the gospel boldy to this lost world. I heard a quote from Charles Spurgeon that said something like “If this world does leap into the lake of fire, may they do it by leaping over our bodies trying to stop them, if they do want to go into the burning pit of hell, may it be with our arms wrapped around their knees trying to hold them back..” Why do we let this world blindly walk over the cliff of eternity into the pit of hell while we stand by and watch? How can the Christians of this world be so cruel? How can we care about our own comforts so much that we would not get up from our lazy boy chairs in front of our televisions or computers to stop these people from running into eternal damnation! How cruel the body of Christ has become in these last days… we have all the authority and power of the world, we can heal the sick, cast out demons, and offer Jesus’s blood stained hands to these people to bring salvation and eternal healing, but we would dare not do that because we would be made fun of or feel scared.
How many people do crazy stunts for the feel of fear? Going on roller coasters, jumping out of an airplane, doing insane jumps with skateboards and motorcycles, we even go to horror movies that have the very purpose of scaring the living daylights out of us, but when it comes to saving the dying….
I guess in the end it doesn’t really matter… let those who live in their sin spend an eternity in a place seperated by the grace of God, a place where they mourn over the truth they realize they have rejected, a place of nashing of teeth and burning of flesh… none of that really matters as long as we Christians are comftorable.
Really what it boils down to is a simple mathematical equasion. (m > c) Where m is our concern for our own comfort, and c is our concern for others. If we could just learn to care more about the lost than ourselves, to have a heart full of compassion then no excuse will keep us from sharing the gospel. Like a firefighter who runs into a burning building to save a family of four, knowing that he may die and not even save them, but his care and concern for them is far greater than his concern for himself. Or like the Chineese Christian who recently went missing while trying to smuggle Bibles into China, the concern for getting the gospel to those who needed it far outweighs the concern for himself. We in America rarely face such drastic consequences, so what are we afraid of?
A lot of why Christians don’t share their faith is because of the churches today. The churches teach that Christians should live rich and happy comftorable lives (which, by the way, is nowhere in the Bible). So that is what Christians do, they try to get rich, be happy and comftorable. That is why this generations churches are producing Christians that will tell God on the day of judgment “Many will say to Me in that day, ‘Lord, Lord, have we not prophesied in Your name, cast out demons in Your name, and done many wonders in Your name?’ and then be told by God “‘I never knew you; depart from Me, you who practice lawlessness!” (Matthew 7:22-23)
I will end here and say good night. May God bless you and give you the compassion to reach out to the lost.
< (((><
Join our forums: Eternal Truth Ministry

Is Christianity a blind faith? 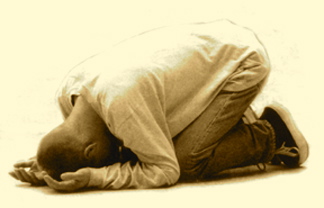 I say this weeping: Church it's time to humble ourselves!