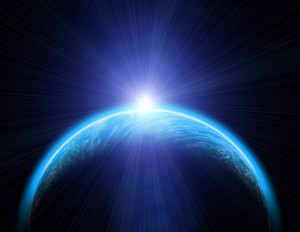 I have been a follower of Jesus for years and have spent a lot of time reading His Word, so I sometimes forget that not everybody knows the basic beleifs of Christianity. I take it for granted that people just believe the stuff every Christian should know.
Take for example this simple question, “Did Jesus exist in the beginning with God?” Before anything was created, before time, did Jesus exist in the beginning? I asked sixteen professing believers I work with this question, and was shocked at how few knew the answer.  Twelve of those sixteen did not believe that Jesus existed in the beginning, and was just the first created thing.

Did Jesus exist in the beginning?

John 1:1-2 simply states this when it says

And who was the Word? Just a few verses later John clearly tells us

And the Word became flesh and dwelt among us, and we beheld His glory, the glory as of the only begotten of the Father, full of grace and truth.
John bore witness of Him and cried out, saying, “This was He of whom I said, ‘He who comes after me is preferred before me, for He was before me.’” (John 1:14-15)

Thus says the LORD, the King of Israel, And his Redeemer, the LORD of hosts: ‘ I am the First and I am the Last; Besides Me there is no God. (Isaiah 44:6)

God is the First and the Last, nothing existed before God and nothing will exist after Him, He is it, the first and the last. In Revelation Jesus identifies himself as ” I am the Alpha and the Omega, the Beginning and the End, the First and the Last.” (Revelation 22:13) The Alpha and Omega are the first and last letters of the greek alphabet, in English it would be the A and the Z. There are no letters before A, and none after Z. Jesus is the first and last, the beginning, and the end.
How is it that both God the Father and Jesus can be the first and the last? This is only possible because Jesus is God. Remember what John 1:1 said, “The Word was with God, and the Word was God.” Both are God, both are one being, one diety, even though they are individual.

In the Old Testament God would refer to himself as simply “I Am” (Exodus 3:14). That in itself is an awesome statement, which I will cover in a future article. Jesus later when talking to the Jews told them “Jesus said to them, “Most assuredly, I say to you, before Abraham was, I AM.”” (John 8:58). Jesus is not only saying that he existed since before his physical birth on earth, but he is identifying himself as being God, as being the I Am. Jesus again identified himself as the I am when he was being arrested in the garden. The soldiers asked if Jesus was “Jesus of Nazareth” and Jesus replied in such away that the soldiers fell to the ground. “Now when He said to them, “I am He,” they drew back and fell to the ground.” (John 18:6)

Jesus is the Creator

When God is creating man He says “Then God said, “Let Us make man in Our image, according to Our likeness;” (Genesis 1:26). Who is God talking to here? Who is God refereing to by saying “Us” and “Our”? God is not a single being but three, completely seperate beings, three deities that are the same. The Word was with God and the Word was God (John 1:1). This is an example of how Jesus did exist in the beginning.
Not only was Jesus with God in the beginning, before creation, but Jesus is the creator. John 1:3 says “All things were made through Him, and without Him nothing was made that was made.” Jesus did not come to die for his Father’s creation, but his own. Isn’t this amazing? Jesus knew what he would have to go through, he knew all of the suffering he would face before he created us, yet he still choose to do so!

Why is this important?

Why was Jesus Baptized?

Is Christianity a blind faith?

What is the Fear of God?

73 thoughts on “Did Jesus exist in the beginning with God?”